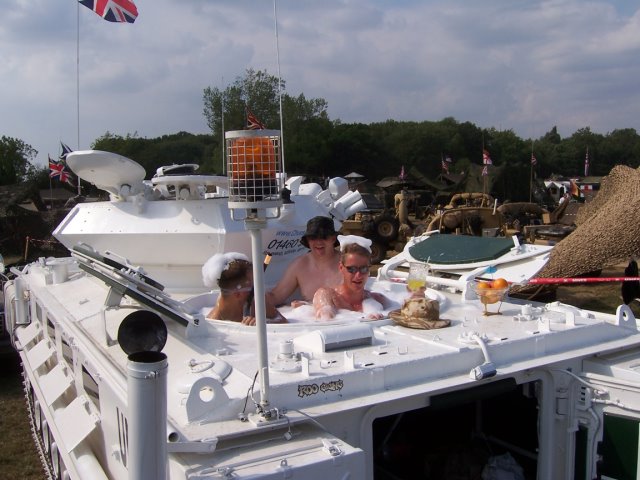 The calendar looked pretty full and it didn’t look likely we could make the War and Peace show this year. Shame I thought sort of a tradition must be 10 or 12 years straight now. They cover some of my costs to get one or two main battle tanks their and give me a plot for my caravan, this year Chooseyourevent.com sponsors the turret as well which together almost covered all the haulage. I drag loads of military crap off the shelf that I think may make a bob or two and we all go off and play, but its bloody hard sweat sort of play its no good going off half cock and looking like a bunch of twats with things breaking down all over the place blocking the entrance to the arena or catching alight.

So this year I thought lets have a rethink we could just take our stretch Limo tank with its Jacuzzi fitted, pop my toothbrush in my top pocket, chuck the champagne out the fridge and put a couple of pints of milk in and off we go .,Ile live in it .

SAS Colin came along as well in case there were any loose women about after his success at the red letter day tennis tournament and Richard and Tim came later. The sun shone and we watched thousands of people fry them selves at the show while we larged it in the Jacuzzi and did we care… no not even a little bit we all deserved a rest it was brilliant and wow after 50 hours in a Jacuzzi you wouldn’t believe how clean my hands came up.

You couldn’t believe the reaction from the crowd they loved it, but Tim loved the roadsure insurance models that got in the Jacuzzi with him more, although he did contract some kind of fungal disease soon after, but nothing he hasn’t had before. Colin however turned in to a Bacardi monster and spent most of his time splashing kids and Germans especially Nazi officers, fair play to the guy. What’s even better is on the War and Peace websites picture gallery were getting 100 times the hits with Tank limo than any other tank at the show take a look WAR AND PEACE-GALLERY, Clean hands and admiration what more could a chap want.