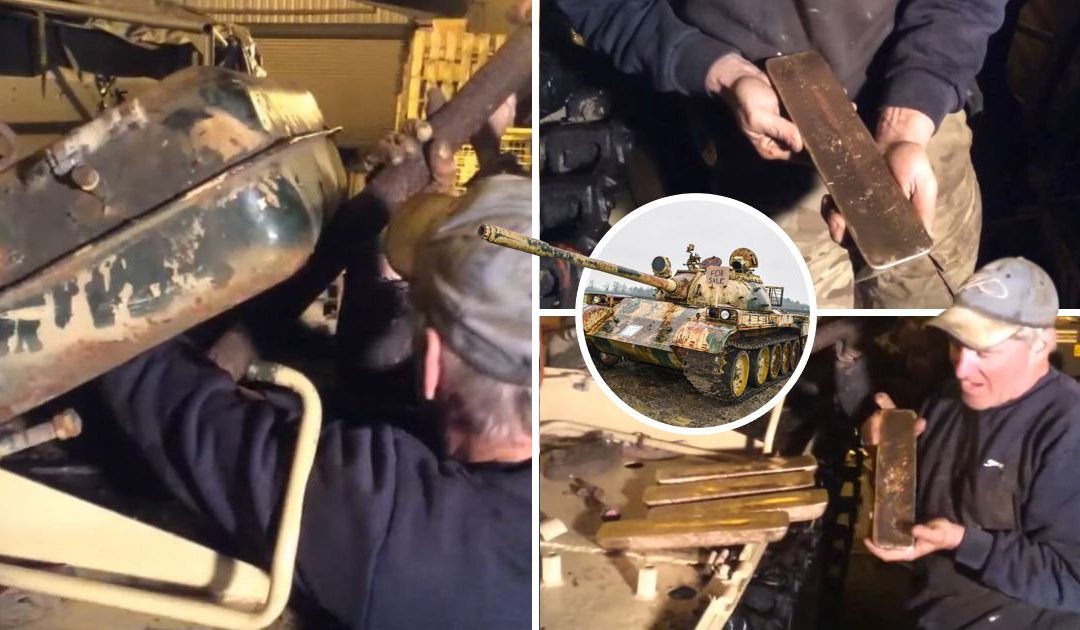 Gold Found In Our Tank – What Would Have You Done??!!

If, while you were restoring a captured Iraqi tank from gulf war one with lots of help from friends and family you made the find of your life.

Earlier in the week you had found live 50 cal ammunition and had to call the firearms dept and hand it in pronto.
So your already thinking other stuff could come to light and every time you un bolt another lump, you wonder what could be behind it.

Then you can’t understand why you can’t lift the last external …fuel tank even though you know it’s been drained by yourself. All the fixings are undone, all the pipes are disconnected but it won’t budge.

Turns out it’s just the sheer weight! with some help you manage to lever the fuel tank up with a crowbar then lift it higher with a scaffold tube. Its then that you see a suspicious square hole hacked in the bottom of the fuel tank.

lots of useful suggestions from the team, Cash converters, cash for gold? – I don’t think so.

In the end it’s a choice between the police, the Iraqi embassy or Kuwaiti embassy. Bear in mind the tank could easily have been involved with the invasion of Kuwait and the defence of Iraqi before it was captured by the British army and brought back to the UK as a trophy of war.

If you report the find and it’s taken away – it’s unlikely you will ever see it again, but you know your squeaky clean and in the clear. who knows one day, probably not soon, it could legally be yours. 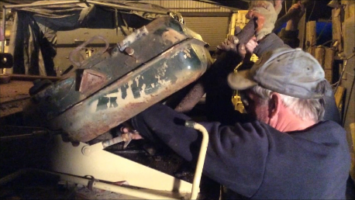 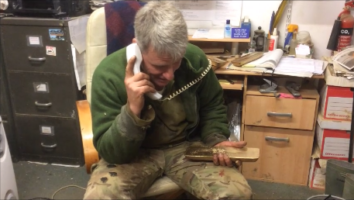 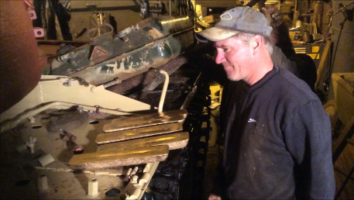 Well last night was the last Tank driving and rides to be had in Saudi Arabia. The combat field has now closed and everything is being mothballed away untill the next adventure. The uk lads all did a sterling job and deserve a pat on the back as does vanessa in the office who arranged all sorts, did the maths and was queen of contracts.We in the uk are still grovelling around in the mud and buying hard. You can never have enough armoured vehicles.# tanks #tanksinsaudiarabia #cvrtsabre. ... See MoreSee Less

There really is nothing better than this. It’s what Sunday afternoons are for 🥰 ... See MoreSee Less

Think the Abbott packs done and made progress getting the tracks on the sabres so we can make space. ... See MoreSee Less

Finally we can let our famous you tubers movie making out. Think his name was Dezzy he has 10 million followers, impressive. ... See MoreSee Less

More progress on my favourite Abbott,we’re ready to pop the new supercharger back in and run it up on the floor for about five hours.Two sabres came in aswellwith lots of potential.I suppose I will have to talk to Ashley about flange soon, he’s getting near the age. ... See MoreSee Less

We’re grovelling about here in the UK getting our favourite London Abbott up to snuff for a few fun bookings that are getting close. An Warren and the team are still largeing it out in Saudi Arabia.Even had the Crown Prince himself and entourage have an early private booking this week.The Saudi job comes to an end on the. 16th of January. The 8 tanks and two containers of spares and specialist tools will be mothballed and a long list of what needs to be replenished will be made so we’re ready for our next middle eastern adventure. We made lots of friends and memories and hope learnt a few things to. ... See MoreSee Less

We filmed this with Big All from Grenade promoting the the new cookie dough protein fitness bar back in September 2020. But We’re sworn to secrecy. Well my little Kate just got the finished movie on Tick tock so I delved and here’s our snippets.NO TURTLES OR FISH WERE HURT IN THE FILMING OF THIS PROMOTION Theirs a rumour the bar cost £28,000 to make and another that Big All sold his shares to Cadbury for £200 million. One day men will walk on the moon. ... See MoreSee Less

A uk pack lift just for a change. Ashley had lots of practice in Saudi so I’m expecting a neat and fast job. Found a crack across the supercharger toCan’t show the YouTuber boxing call untill Friday, sorry to keep you in suspenders. ... See MoreSee Less

We always need lots of cars for crushing but this time we needed a red white or blue one for painting up in the star spangled banner for a Boxing taunt.We found one in the end and made a nice movie but can’t show it till Thursday. We give a pet away to. ... See MoreSee Less

I almost forgot until Office Vanessa gave me a good telling offH licence training day and tests available on 17 18 January we normally have a waiting list months ahead book quick. ... See MoreSee Less

Another time Lord expecting a free fix. Jonnie vegas doing a bit of filming for his new series and a movie walk around for a Kiwi man wanting to buy a MAN HX truck for an over lander camper conversion. Busy day all in all. ... See MoreSee Less

I’m getting back in the swing of things with a skilful bodge on a Porsche and Mr Warren is holding the fort in Saudis Arabia.Any Borat resemblance to people starring in this movie is purely coincidental and beyond our control. ... See MoreSee Less

Much of a muchness, im in the UK building up stock as fast as possible and Warrens busy nailing jelly on the ceiling in Saudi Arabia. Credit where credits due tha Saudi team a have kept things ticking along like clockwork.while I have enjoyed Christmas with the family back in the uk. Although I’m already starting to pack my case I’m also buying 432’s Abbott’s and 434’s and associated spares as hard as I can. If your in a selling mood get on the blower quick. ... See MoreSee Less

Merry Christmas from the Mead family. We’ve had the best day. Jackson has been a pure delight. And….. he loves Brussel sprouts hahaha. Enjoy the rest of your day and he’s to a fab Boxing Day full of more food games, power naps and more food. Love from the three of us xxxxx ... See MoreSee Less

It could have been worse nobody got squished ... See MoreSee Less

I still love UK weather, but back in Saudi the centre is closed for a few days, worrying thing is my guys are still going in tidying and spannering. 8/8 vehicles running. I’m flat out buying new stock, this end, 432s, Abbott’s and 434s especially but anything green and armoured and I’m finding it hard to resist at the moment. ... See MoreSee Less

Will this is your Spartan your spares are in it but I will spray a set of reproduction smoke dischargers that won’t get us arrested when customs pounce on them.A short clip of a corporate day the lads layer on while I was tied up.I love the uk weather, seriously I really do. ... See MoreSee Less

I told Jackson it’s Christmas next week and he has to be a good boy for Santa to come and see him / He said “but mum, I’m my fathers son, I have no hope” 😂 ... See MoreSee Less

Meanwhile Tanks a lot Saudi Arabia is coping just fine without me, according to your Jackson who keeps a close eye on things. ... See MoreSee Less

They have been busy, now we hardly have room for customers.Tanks a lot uk ... See MoreSee Less

This should have been Young Jackson’s first vehicle buying trip today, however his baby seat wouldn’t clip into the pickup- what a shame 3 more vehicles for the collection and I get home to roast leg of pork, it’s been a while! ... See MoreSee Less

What do you get when you put fighter jet engines on a tank? The most extreme fire truck ever

Took nine weeks for one of mt Saudi instructors to tell me I was on the back end of a tv advert for combat fields.that explains why I have Been mobbed for selfies and people wanting my autograph, bless um.Back in good old Blighty for Christmas, you can’t beat it ... See MoreSee Less