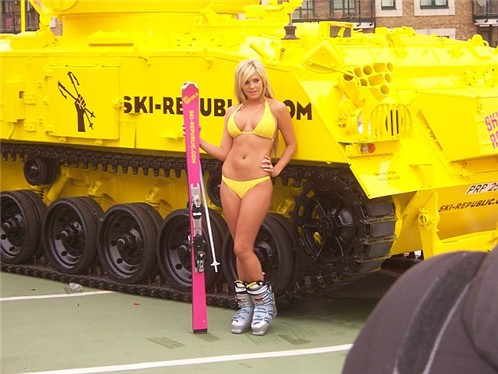 We had a call from a promotions company called Slice. Melissa was our contact; she needed Tanklimo spraying yellow and raspberry graphics adding all over, and then it being driven around Olympia all day. Impossible i said, any idea how much that would cost and then putting it back to white and getting all the Tanklimo graphics done again .So guess what happened, Yep we stripped it down and refinished it just for that one day.

Any excuse to get high as a kite on paint fumes, and their was the bit about Danielle Lyode doing a model shoot as well and young Liam begging me on his knees to get involved. So of we sped at 5am for the model shoot on top of Tescos car park next to Olympia Daniela was a sweet girl and Liam rather liked the Promo girls employed to throw their balls about. SAS Colin got weed on by Danielle’s dog which was appropriate really. That part went rather well .Then we rattled of to go around Kensington and past Olympia to promote Ski republic a Ski hire firm !

With a string of shops across Europe It was the big ski show at Olympia and they wanted to make a bit of a splash .Seems it did and the small road in front of Olympia was a private one and it wasn’t long before the Police were called But the Met are a good bunch and we had no problems ended up rattling about all over London probably the highest mileage Tank limo’s ever done in a day, but she went like a train ,Couple of small hiccups when a taxi driver decided to play chicken with a tank and Sas Colin ,Bad Move.

And some old tramp ran out in front of me to give us a can of beer, probably his last can now that was sweet. Even got a picture of an evening standard van after it tried to squeeze past the inside of the low loader and ripped its wing mirror off, will they ever learn. All in all a fun day out of the workshops and another chance for Tanklimo to do the bizz again reckon a million people took its photo with their phone