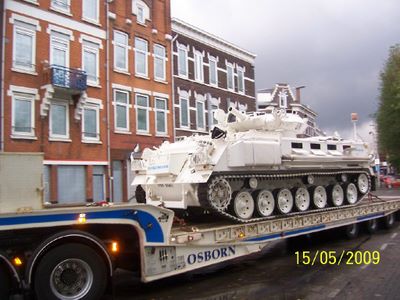 We had a call from a guy called Coen, who asked if we could ship the Tank Limo to Holland for a big party he and his pals were organising. It didn’t take me long to say yes. It turned out it was a massive party for a college campus fraternity. The only rule was every guy who had an invite, had to bring two beautiful girls with him, and they’re not in short supply in Holland, take my word for it.

It took three of us two days of cleaning and polishing inside and out to get the Tank ready and all went surprisingly smoothly. There was great food on the ferry and comfy cabins too. I loved the party. This fraternity hold this sort of a bash every 5 years and it goes on for a couple of weeks. We were really there for the organisers, Diedrick, Coen and the other 4 to make a grand entrance at midnight. Six young guys all dressed in gold suits and shoes. Wow!

It was very tight getting the Tank Limo into the main party area, but it gets into some pretty tight spaces with a bit of careful driving. We had a couple of brushes with the police, one before the party and one during. We were lucky to smooth over the second one. They were firearms officers and at first were frosty to say the least. They were surprised customs hadn’t given us any trouble on the way over.

British customs made up for it on the way back. They ended up X raying the low loader and Tank with this massive X-ray boomed truck. We got the all clear which was a relief coming back from a place like Rotterdam.

What did I learn?

1. Ferry food for the truckies is good.
2. Long hauls are very tiring.
3. The Dutch police don’t like guns much.
4. Dutch girls are tall, slim and beautiful
5. Dutch guys are generally 7 foot tall.
6. When someone says they have organised a bed for you, check you get a room to put it in, bless.
7. Would we do it again? Yes
8. Craig the lorry driver is a red hot go cart racer.
9. At a very loud bash, when you open the backdoor of the Tank Limo, the vehicle becomes a speaker and is deafening inside, earplugs required.

Is this heading to you by any chance just clocked it on the m6 very nice ... See MoreSee Less

Positive progress on the flower power 432 it’s nearly finished. And very exiting news on 430 track pads I have several sets being made right now and I can’t wait to try them on the open road and the beach,6 times the wear life,9 mm deeper than the originals and they don’t leave black skid marks when you turn hard on concrete. They should last longer than the engine pack ... See MoreSee Less

I’m sorry my husband is so terrible at taking pictures and I’m clearly a pregnant mess 😂 however.... LOOK at my epic new T shirt! What do you think? I LOVE LOVE LOVE IT 🤰🥰 ... See MoreSee Less

H licence test results. And lots of tinkering in the Afghan workshops. We don’t know why we’re working on my stormer but we can’t resist it.#tracklayinglicence #Hlicence #drivetanks ... See MoreSee Less

Some tiinkering with bits of metal today but mostly training for H licences. The test is tomorrow. Will our big yellow trator keep its 100% pass rate.Sebastian is a last minute replacement from a guy who has a interview to work in a strip club sweeping up and had to postpone.Who thinks Sebastian will pass, he hasn’t even started shaving yet so it’s anybody’s guess.WHATS YOUR GUESS. Leave a comment. I’m not shy, tell it how it is. ... See MoreSee Less

A fettling bank Holliday, at least I can open my Rangie up again. ... See MoreSee Less

Doing Sis inlaws 40th birthday car crush felt like the old Pre covid days, we haven’t seen anyone for a year. I think I was rustier than the Tank, she kicked Ford KA arse as usual.Mathew shot great with my make do shotgun, I broke my best one so having to struggle along with piece of foreign rubbish made in Holland probably. It says Holland and Holland on the side anyway. Seems to handle surprisingly good if I’m honest.Got me thinking is Fast an furious 6 tank clip on YouTube the most famous tank scene in the world. Four minutes ar total action packed carnage.Or Maybe the Tigre tank bank bust scene in Kelly’s Hero’s woof woof woof.WHAT DO YOU LOT THINK ... See MoreSee Less

We have a family car crush tomorrow and some clay shooting, which means the FAST & FURIOUS 6 got some love today.Joe now owns a cheap (but in good order) ferret; everybody loves a bargain. The little beauty ended up running and driving even if it did take till dark. All potential Stalwart customers looking for a craned swimmer, road registered, keep your eyes peeled 👀 #daimlerferret #alvisstalwart ... See MoreSee Less

Don’t you just love taking out glass lenses and cutting your fingers. And a little reminiscing from the real world when we could play. ... See MoreSee Less

Almost time to say goodbye to the flower power 432 and our lovely Saber. Full steam ahead on its replacement. ... See MoreSee Less

Everybody wants a cheap ferret.Please share this the ferret buyer looks a bit peeky, put it this way if he was a parrot I wouldn’t buy him. If he rolls over dead before Saturday I need a new buyer.#ferret #deadparrott #militaryvehicle ... See MoreSee Less

Alvis Stalwart raiding party. If your in to stalwarts and fancy a project or yon need stalwart parts keep your eyes peeled. We have 14 stalwarts and have started breaking three war reserve no milage ones.Please share this to your stolly mates they may want a project or a thinganjig.#Stolly #alvisstalwart #stalwartspares ... See MoreSee Less

A few shots from a gas/ oxygen Rarden cannon and the RAF launch a mock attack so as not to feel left out. Was it the whole of the airforce I counted 8 jets.#tornado #blankfiring #CVRT ... See MoreSee Less

Somehow we managed to test drive the flower power 432. Despite every possible distraction thrown at me. My free ferret came. It was a gift with a genuine VIGILANT 7/2 turret, all intact.And Kates started eating Gerkin. ... See MoreSee Less

Great progress with the custom work on the cvrt Sultan, but we are not sure what to rename it.The covid jab on Sunday caught up with me and I really haven’t got the strength to road test the flower power 432.#bigdog #Rottweiler #armytanks ... See MoreSee Less

A productive couple of days bought, another ferret at night managed to get a set of Saracen engine covere for our Saracen dragster.The new Cvrt Saber straight from the army drives and the buyers Deposit arrived so it’s full steam ahead with the grinders. You won’t believe what we’re building this time. ... See MoreSee Less

Pistonbroke Trucking That tank you have been wanting for so long.....take your pick.😁 ... See MoreSee Less
View on Facebook
· Share

When I bought my best champ it had no front bumper. I’m off out now to check for panel straightening. ... See MoreSee Less

A mixed day with everyone on a different project. Pinzgauer no 2 now mot’dSaracen dragster another piece of the jigsaw done and a deposit about to be paid on a huge customisation on a cvrt project we have chosen to accept.We’re we’re so exited we could shit.#tank #saracen #pinzgauer #CVRT ... See MoreSee Less

The BBC 432/ warrior lookalike (their opinion not mine ) from the new drama danny boy has come up pretty well not sure when or if we will ever be tracking around London with 15 Chinese tourists in the turret.A generous Saracen gearbox donation from a bunch of carrot crunchers up the road.#bbcdrama #dumbanddumber #Saracen #militaryvehicle ... See MoreSee Less

Bit of progress on a Saturday is a bonus. Next job on the Dragster Saracen is getting the propshaft made ,it’s got to be balanced by professionals.SHARE THIS IF YOU CAN, IT COULD GET US MORE CRAZY PROJECTS.#saracen #tank #militaryvehicle ... See MoreSee Less

Disappointingly (due to fun distractions) I didn’t get around to chopping the front off the Saracen dragster project, however we did take delivery of some more toys. Check out the reproduction cvrt smoke dischargers we have had made-Slightly smaller tubes so a smoke Grenade won’t quite fit in them. Very legal especially, in the states 😉 ... See MoreSee Less

Great to be back on our Saracen dragster project. The big turbo V8 should really light it up. Progress on a few other projects to.#Saracen #dragste #armouredcar. ... See MoreSee Less

You can’t help loving a Champ. I learnt to drive in one at the age of ten on a Norfolk beach. And bought one for my self at about 20, it was my first ever military vehicle.#militaryvehicle #ferret #minigun #gatlinggun #robocop #austinchamp ... See MoreSee Less

You have five seconds to comply, the mini gun is alive. ... See MoreSee Less

Funny how things go round in circles. This all started with me buying cheap stalwarts from AF budge and selling them in it the autotrader, probably 25 years ago. Look what just rolled in.And a little reminder of when Kate was a bit more mobile, she’s just itching to be back in the muddy seat.#stalwart #stolly #militaryvehicle. ... See MoreSee Less

Back to Genral tank life after Macs funeral in London with Tankhearse, loading a trackless cvrt Sampson and showcasing a ManHX for a customer. ... See MoreSee Less

Think this would be right up your street. ... See MoreSee Less

Bit of light hearted fun...... who’s looking the oldest 😂😂 has all this hard work taken it’s toll on Robert? Does Nigel look like my grandad.. 😂 ... See MoreSee Less