Dougie Lampkin Rides His Bike Over Our Tanks 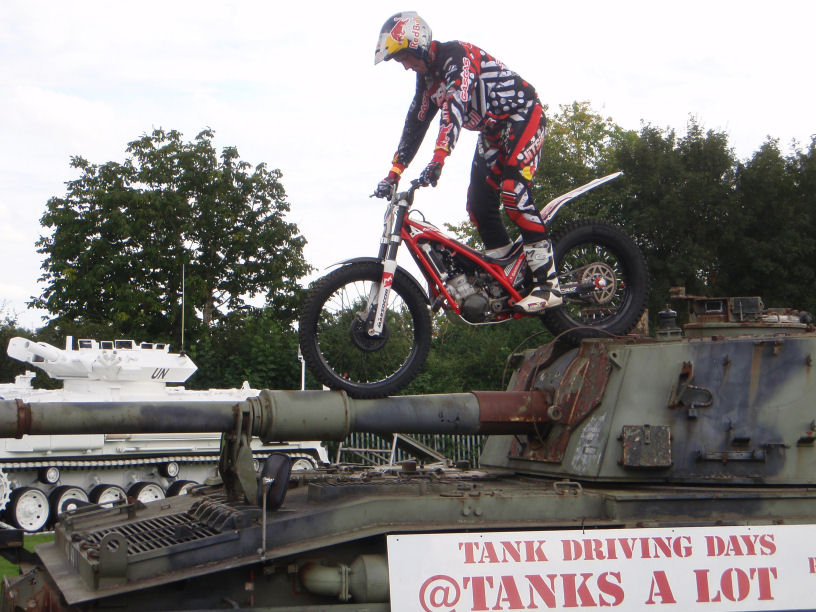 Dougie Lampkin Rides His Bike Over Our Tanks

We had the chance to get involved in the Brackley Festival of Speed, all motorbikes, not really my thing. I’m more of a trials bike rider. The deal was – could we rattle a couple of tanks down the town so Dougie Lampkin – 12 times World Champion MBE – could pull a few stunts over them on his bike.

We were well up for that, if he promised not to scratch them. The night before the big day we roared my new Abbott down the country lanes to Brackley, it’s only ever done 119 from new so I was a little nervous to start with – but WOW did it go! Caused a few double takes from people supping pints in some local Hobo haunts.

The stretch limo went well too and caused even more of a stir. It’s known around here and some expect naked dolly birds in the Jacuzzi whenever they see it. They were disappointed this time.

Met Dougie, nice chap, then met Flying Ryan and Trying Brian – couple of guys with little or no brains left from previous biking accidents. They proved this the following day at the show. Check the pictures, you be the judge – brave or death wish?

Thankfully he managed not to dangle his onions out when displaying it. To my relief!