Dom Jolley with Fifth Gear in the Cotswolds 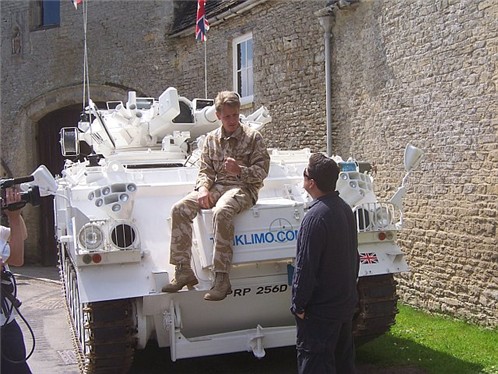 Filming Dom Jolley with Fifth Gear in the Cotswolds

What could be better, Money, meeting Dom Jolley and driving a stretch Limo tank round the Cotswolds on a sunny day, No naked girls, but well i find that rather offensive anyway, its just SAS Colin that gets all exited and starts dribbling all down his chin, We also Had Sandy Difurie with his posh lorry so what could go wrong. Dom was a Jolly chap full of fun and liked to crack on and get the job done; maybe he was just a bit nervous the police were on their way who knows.

But its the firs time we have ever left early when dealing with luvies.we were mostly driving around Ovenington a quiet little village famous for having the smallest pub in Britain, fat lot of good and Dom Jolly living their .The whole thing was for channel 5’s fifth gear i believe it comes out on 18th June so I’ll try and avoid it ,I know ile be tucked up cos the interview lasted 20 minutes and you know they only need about 60 seconds for the Tele ,Guess what 60 seconds there going to play ,the bits that make me look like an Anorak.

But HA HA i was being paid after all. Picked his kiddies up from school and checked how many kids you could stuff in Tanklimo, 61 incase you were wondering, Best bit was if we saw any pedestrians i would pull over and Dom would say neibourhood watch seen any trouble some people actually took him seriously ,Just goes to show how smartly dressed we are.