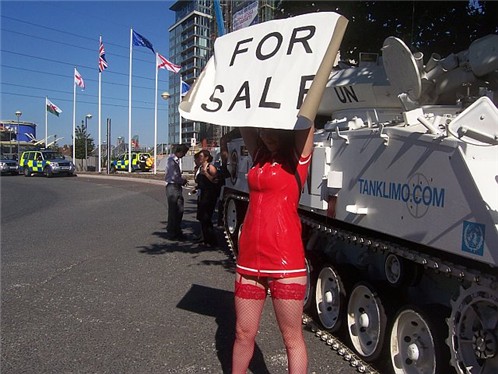 We had this mysterious call from a young lady called Hanna needed the Tanklimo in London in two days time .She was a little cagey about what it was wanted for ,which doesn’t really work with me .Turns out she wanted it to head a peaceful demonstration around Docklands highlighting the international arms fair being held at Excel on and needed some were secure to store the petrol bombs .Only kidding , It was the next day it dawned on me this was the anniversary of 9/11 and we in the heart of London ,Shit, glad im in a tank ,hope the weld were i joined the two halves together can take a full on blast. Decided for this one i would need the full crew Wonderful Wayne and No panic Nigel with me if we were to join forces with the great unwashed and pull it of with no accidents or upsets with the Police.

We met Hanna and Tina with their push bikes in London and quickly threw their bikes on the back of the low loader then sped of with them in the sleeper cab giving directions, in! no time at all we were wedged under a low bridge No sweat Nigel showed us his reversing skills while Wayne and i played stop the traffic, we eventual found a place to drop off the Tank and track of to the demo ,it was then that i learnt that two other tanks were lined up for the demo as well, But hadn’t i got the only hire and reward tank in the country i thought ,sure enough we soon learnt the Police had nabbed the other two and they wouldn’t be getting their.

Within ten minutes we had Police vans all around us .This will be interesting i thought, and it was the Police were good as gold and in no time had sorted us an escort, front and rear .The SPACE HIJAKERS followed on their bikes .As for the demo it was madder than a box of frogs nudity and a naughty nurse who took a shine to Wayne ,sad for her he prefers the more mature type see pics.All in all we had a great time real interesting. Tanklimo did the bizz yet again the police were great and the demonstrators ha! d washed ,well most of them anyway .if you get a chance take a! look at space hijackers web site its a cracker.

Finally for the military enthusiasts, why did we do it, will it get privately owned military vehicles a bad name. After some thought i decided they were going to get some one to do it and it could turn in to a riot with a tank at the front ,if i was doing the job i knew we could do it with a little consideration for the police, Excel and the m.o.d and if it started turning nasty say thank you very much and good bye, im the last person wanting trouble associated with military vehicles’ and then their was the money and the Naked girls and a day out of the workshops for me and the lads.

It’s just possible we are half way on preparing the vehicles going abroad, I really hope so.We still need to buy an Abbott or two Abbott packsRegulator boxesRight hand final drives.Must be some out there. ... See MoreSee Less

Lost four pounds and been to the dentist three times. Must be taking the Saudi job seriouslyNice mini for crushing, somebody’s getting a cool crush. ... See MoreSee Less

About cream crackers, almost cattle trucked. A warm day for sand blasting but lots of progress. Everyone worked very hard including our first ever volunteer. Cheers Martin your help was appreciated.The only fun part was buying another two good 432s and a very tidy T 55 Kate will be pleased they are her most favourite drive. ... See MoreSee Less

Really good to do a kids party with my beautiful little wife. With Covid and baby Jackson coming along it’s been a while. Thank goodness for babysitters.Good driving Seb, thanks for the pizza,hope you like this movie. Happy birthday. ... See MoreSee Less

The first 432 for the Saudi Arabia job is close to being finished, few more vehicles arrived today which proved a bit of challenge unloading.Where can I buy remanufactured Rarden cannon troughs for the new Cvrt Scimiter. ... See MoreSee Less

Another busy day, tested yesterday’s new 432 with some lumber jacking and learned not to leave the Tanks a lot cheque book in Roberts control when he’s dealing with a top class sales lady.Bit more on the snipe.I also have this feeling the Etype won’t be long coming back with its posh new aluminium radiator . ... See MoreSee Less

Nice to see Kate back on the spanner’s withJackson holding her spare ones. ... See MoreSee Less

Was an early bird this morning to get the green stripes on the snipe and Spartan, I’m normally an Owl,. Not a wise one a night one. ... See MoreSee Less

Finally got the first coat of paint on the snipe, then a long afternoon instructing with some rather compedertive brothers. Well done lads hurry back anytime. 150 days in Saudi Arabia is sinking in AAAAGGG. The contract is signed on the first sixty days the add on is still to be negotiated and needs a careful think about. ... See MoreSee Less

I love it when new vehicles arrive, and lots are coming. Some for the Saudi Arabia adventure which has now changed to 150 nights instead of 60. And a few vehicles just because they will be great for our UK customers to drive.Tv company has approached us again about a tv series or an hour documentary about the adventure.I really think people should lower their expectations before I start wearing red underpants on the outside of my trousers. ... See MoreSee Less

A fun birthday for my old mate Jimbo’s eldest Louis. A good excuse to get the posh stolly out and blow the cobwebs out of the T55. Bonus was they could shoot.Christian a fully trained up Man HX and Foden drops ex squaddie paid a visit and got roped in. Maybe next time we will use the drops 8x8’s . ... See MoreSee Less

Today was a day of head scratching and geometry, or what I call suck it and see. Luckily every thing turned out great and only one finger was needed by Joe 1.Tomorrow is going to be a day of fun, a burn up in a T55 and our exceptionally tidy stalwart full swimmer. Planning on giving a Foden 8x8 drops lorry a good blast off road to if It doesent rain. Watch this space.Jackson’s walking at seven weeks, making me proud. ... See MoreSee Less

Got play with the new yellow thing, got free socks. Sold a Pinzgauer bought lots to take to Saudie Arabia. ... See MoreSee Less

I need a helicopter, not a flyer a nice static for display, something military or that would look military with a coat of camo. ... See MoreSee Less

Yesterday was a stag day for criss and all of his mates and Dad of course, I’m glad Dad came because he likes helecopters. Now I like helecopters So does Robert,Charlie and Nigel like helicopters.If your pilot and son aren’t British champion low level thingy upside down event don’t go with them or wear brown trousers.It made me realise1 I need to weigh in lots of cars.2 what a wildlife habitat we have accidentally created.3 I need more tanks ... See MoreSee Less

The next few months are going to be a killer, but absolutely worth it. Saudi is an amazing opportunity for Tanks a lot…. So we needed the calm before the storm, our first night out in 18 months and it was a great night!! Probably be another 18 months before the next one but that will be worth the wait too! Now we are off to get Jackson! Happy Sunday everyone 🥰 ... See MoreSee Less

Thanks for a great day today Nick, Nigel and team, loved it all. I know everyone in our group enjoyed it. Because they are still bloody talking about it. 👍👍 ... See MoreSee Less
View on Facebook
· Share

Do my fish eat better than you. The calm before the storm, Saudi Arabia here we come,Need 432’s and good Abbott’s quick, all sorts of spares especially Abbott packs. ... See MoreSee Less

We have finally agreed to a contract to open a Tanks a lot in Saudi Arabia and are very exited about the opportunity.We need to purchase immediately 430 series vehicles and parts Abbott’s 432’s and 434’s and associated spares.Abbott packs432 packsK60 enginesGearboxesFinal drivesTrackHeat exchangers Starter motors Fuelpumps Injector pumpsBump stops Road wheelsShock absorbers Fuel filtersGearbox filtersEverything to be shipped mid aAugust but the shipping list must be completed by 12 July. ... See MoreSee Less

Steaming along on the snipe, small annoying mole distraction and another couple of car crushes.We need lots of old cars, we collect, we pay over scrap prices. Your car will be famous for ever. ... See MoreSee Less

It’s been all of a week since you saw Jackson, you must be missing his cute face 😊, well… here he is, the first smile… heart melting 🥰 ... See MoreSee Less

Sometimes you have to just down tools and have a little play. Lots of snipe progress and the monster Saracen front end plates come Friday. Hands up whe thinks a Saracen should have been 4 foot longer with double the power. ... See MoreSee Less

In with the old and out with the new, yes you read it right. As much as I love my Bentley that hand stitched cream leather interior is not what a scruffy oiled handed chap like me should ever be allowed to even sit in. An Aston V8 with a black interior is a lot more me as a Sunday drive.Snipe is steaming along, very happy with the twin exhaust silencers. And I changed another Nappy today. I can’t believe a baby needs changing more than once a week, what Evers wrong with Jackson Horatio ... See MoreSee Less

A great Father’s Day. All my sons here at once. Roast beef and homemade lemon meringue pie some fun people up tank driving and shooting a few clays. Cheers guys for driving well luckily everyone scored exactly the same on the shooting and Oliver did a great crush on the Bmw M. ... See MoreSee Less

Like father, like son 🥰 it’s a hard life all this eating they both do 😂 sends them off to sleep every time! Peace and quiet… for about 10 minutes. My little dream team ❤️❤️❤️ ... See MoreSee Less