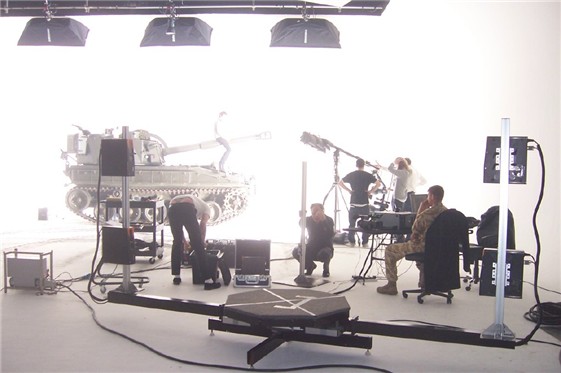 We had a phone call from a young lady called Andrea from Park royal film studios in London could we ship in a Tank for a Naomi Campbell film shoot, Liam said ,we would need a Tank with her, got quite a temper, I said don’t believe anything you read in the papers, bet she’s great. Who was right, I was, lovely girl, nice as pie Rather stunning to. I’ve met lots of so called models and celebs and often you think, I don’t get it, she’s supposed to be a real stunner Yet in reality you would only try and pull her on a Saturday night if you needed some one to sit at the corner of your scalextric track to keep putting the cars back on.

Can’t mention any names cos im a gentleman .Biggest stunner so far Emma noble WOW. This was a strange job the set was perfect white with all the corners curved ,with the bright lighting you just couldn’t tell were the walls were bit nerve wracking driving a tank in and swerving it round .All went well, no damage ,should have seen the exhausted smoke though Didn’t get a picture of Naomi Campbell on my tank but have had one promised By Nick the photographer so watch this space ,Hopefully get lucky did stay on an extra 4,1/2 hours at half price and did some pyros with bangers and self raising flour for free.

The big hold up was so they could laser scan the tank to make a white full size copy with Naomi on the top. Probably cheaper to buy the tank and paint it white, plus you could still have the fun of driving it. Liam and I got our picture taken with the ford Focus poster model, bit nice to. She asked me about Liam’s tel. number, cant blame her but i told her i didn’t think he would be interested. The food was great to only bad bit was we got home at 230 am with a corporate day kicking of in just a few hours .And the lorry driver had to have a night out charge the extra 4 1/2 hours waiting plus 4 hours the next morning to get the tank home cos he ran out of driving time. All in all a day out of the workshop